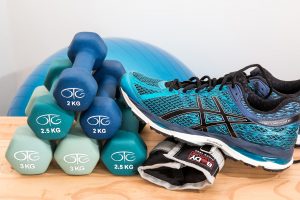 A new study determines that working out two to three times per week for 30 minutes is sufficient to keep the middle-size arteries (the ones that supply oxygenated blood to the head and neck) young. People who exercised four times a week or more additionally kept their main arteries — which provide blood to both the chest and abdomen — healthy. Basically, if you want to keep your heart young, plan on exercising at least four times every week.

“This work is really exciting because it enables us to develop exercise programs to keep the heart youthful and even turn back time on older hearts and blood vessels,” explained one of the authors of the study, Benjamin Levine, M.D., founder and director of the Institute for Exercise and Environmental Medicine (IEEM) at Texas Health Presbyterian Hospital Dallas.

Researchers with the Institute for Exercise and Environmental Medicine at Texas Health Presbyterian Hospital and the University of Texas Southwestern Medical Center enlisted 102 people over the age of 60 who had consistently kept track of their exercise habits throughout their lives. They also looked at arterial stiffness of each participant, which is a key index of arterial health.

Then they split their subjects into four groups based on how often they worked out. There were the “sedentary” folks (who engaged in less than two exercise sessions per week), the “casual exercisers” (with two to three per week), the “committed exercisers” (who logged four to five per week) and the “master athletes” (who managed to pull off an astounding six to seven exercise sessions in a single week). The results? As mentioned above, working out at least four times per week for 30 minutes was found to be best.

Most of us already know that the benefits of exercising extend past physical appearance. Not only can it boost your mood, it can also prevent a slew of chronic health conditions, help with bone and muscle health and seriously improve cardiovascular health.

Sure, this study has flaws. It doesn’t specify exactly the type of exercises participants engaged in, only that they counted “moderate” intensity and above and that the sample of participants was relatively small. However, these recommendations aren’t unrealistic and are pretty consistent with those of the Centers for Disease Control and Prevention (CDC), which suggests that adults get at least two hours and 30 minutes of moderate exercise per week or one hour and 15 minutes of vigorous exercise. So, yeah, no excuses.

If this new research isn’t enough motivation to get your butt off the sofa, here are nine unexpected things that happen when you abandon your workout routine. Now get moving!