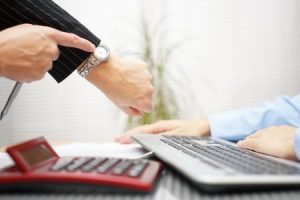 The prospect of corrective action or termination makes a lot of managers nervous. That’s understandable. For employees, being disciplined or losing their job can be anything from moderately embarrassing to financially devastating, but it’s rarely a happy occasion. For the employers, these actions always come with some risk, and there are plenty of legal danger zones an employer can end up in if corrective action isn’t done properly.

Here are some tips from our HR Advisors to help you avoid these pitfalls and make corrective action productive for everyone:

Managers should follow consistent disciplinary practices. Management meetings are a good time for the leadership team to make sure they’re using the same practices for discipline and termination. Inconsistencies in the organization, as noted above, can lead to allegations of discrimination.

Investigate allegations before you act on them. Sometimes, in a rush to correct wrongdoing or poor performance, a manager will discipline an employee after hearing only one side of the story. For example, a restaurant customer complains about rude service, and the server is immediately terminated and given no chance to explain what happened from their point of view. Such adverse actions tell employees they can be penalized even if they do nothing wrong, causing them to feel resentment, fear, and distrust. And the manager can find themselves in an awkward termination meeting if the terminated employee can prove then and there that they didn’t do what they were accused of doing.

Written warnings are best drafted by the manager and reviewed by HR. An employee’s manager often has firsthand knowledge of an infraction or unacceptable performance, so they’re in the best position to draft the written warning. HR can collaborate with the manager by reviewing the warning, ensuring that it is factual, unemotional, thorough, clear, tied to a company policy, and consistent with how others have been given written warnings previously.

During a disciplinary meeting, a witness can help document what was said and done as well as provide logistical details. Not every disciplinary meeting needs a witness, though, especially if the issue is a minor one, or it’s a first conversation about performance issues. In these cases, whether to have a witness present can be left to each manager’s discretion. A witness is more useful for a meeting that is likely to escalate, either due to the nature of the issue or discipline, or the temper of the employee.

Fairness and courtesy can go a long way, even when termination is necessary. No termination meeting will be pleasant, but they’re often more unpleasant than they need to be. Good practices here include being honest and clear about the reason for termination, not relying on being an “at will” employer to avoid telling the employee why they’re being let go (they’ll generally assume the worst), and holding the meeting privately and at the end of the day so that the employee can clean out their desk and exit the workplace without an audience. Whatever a manager can do to help the employee leave with their dignity intact will be helpful in preventing future issues with the now-former employee.

Discipline and termination can be in the employee’s best interest—allowing bad behavior and poor performance to go on unaddressed does them no favors. If an employee isn’t doing a good job and is unable or unwilling to improve, they’re not helping the employer, their teammates, or themselves by staying in the organization. Chances are good that they’d be more successful and happier doing something else for someone else. And that’s okay!