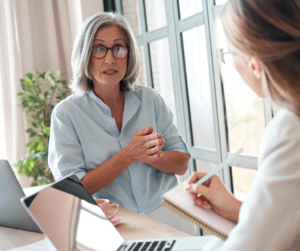 Today’s offices potentially span five full generations ranging from Generation Z to the Silent Generation. A coworker could just as easily be raised with a smart phone in hand as they could have used a typewriter at their first job. Some see differences between generational colleagues as an annoyance (“kids these days!”) and many rely on generational stereotypes as fact. Current research questions the validity of generational stereotypes. This series uncovers top generational myths as a strategy to support a diverse and healthy employee population.

The U.S. population soared following World War II and this surge created the aptly named Baby Boomer generation. This generation was born between 1946 and 1964 and represents the eldest colleagues at work. The top three myths of Baby Boomers include:

This stereotype has been overplayed in popular media. (The older colleague scared of Excel who needs to call the helpdesk to send a Slack message.) The truth is that a member of this generation (Tim Berners-Lee, to be exact) invented the internet. And while their zeal for new apps will likely not match your fresh college graduates, they are still more than capable. Between 76% and 81% of Boomers go online regularly. Give them a chance.

The real question is, how are you defining tradition? Because Baby Boomers were the firsts in a lot of meaningful areas that can hardly be called traditional. Many Baby Boomers were idealists and had no problem taking action to support their social and political visions. This same vigor is seen in the workplace. For example, more Boomer women entered the job force than prior generations, increasing representation in the workplace. Just because this generation doesn’t share some of the same proclivities as younger generations, don’t assume they won’t speak up for what they want or will accept the status quo.

With the older members of this generation approaching 80 years old, many assume this group is on its way out the door. The facts tell a different story. A 2018 Pew Research Study showed that close to 30% of Boomers in the 65-to-72-year age range were engaged in looking for a job or working. Baby Boomers aren’t sitting back on their heels (nor can they with the additional income needed to support the longer lives they lead in comparison to their parents’ generation). They want to stay connected with the workforce whether this is staying on staff in a full-time capacity or finding a part-time job where they can explore their hobbies. Boomers make great mentors as well so don’t pass up this opportunity to learn from your elders.

Baby Boomers had, and still have, a heavy pull in corporate America. This is a result of their group’s size, as well as their plans to stick around the office longer than expected. They may be more technology savvy than assumed and can’t be boxed into the traditionalist category. Finally, Baby Boomers are full of institutional knowledge that other generations should soak up.

This is the last article in the multi-generational myths series and can serve as a warning to not judge a book by its cover. While generations are affected by similar political, social, and economic events, they also develop in nuanced ways.